Enter Your Name and Email Address below to Get Started: 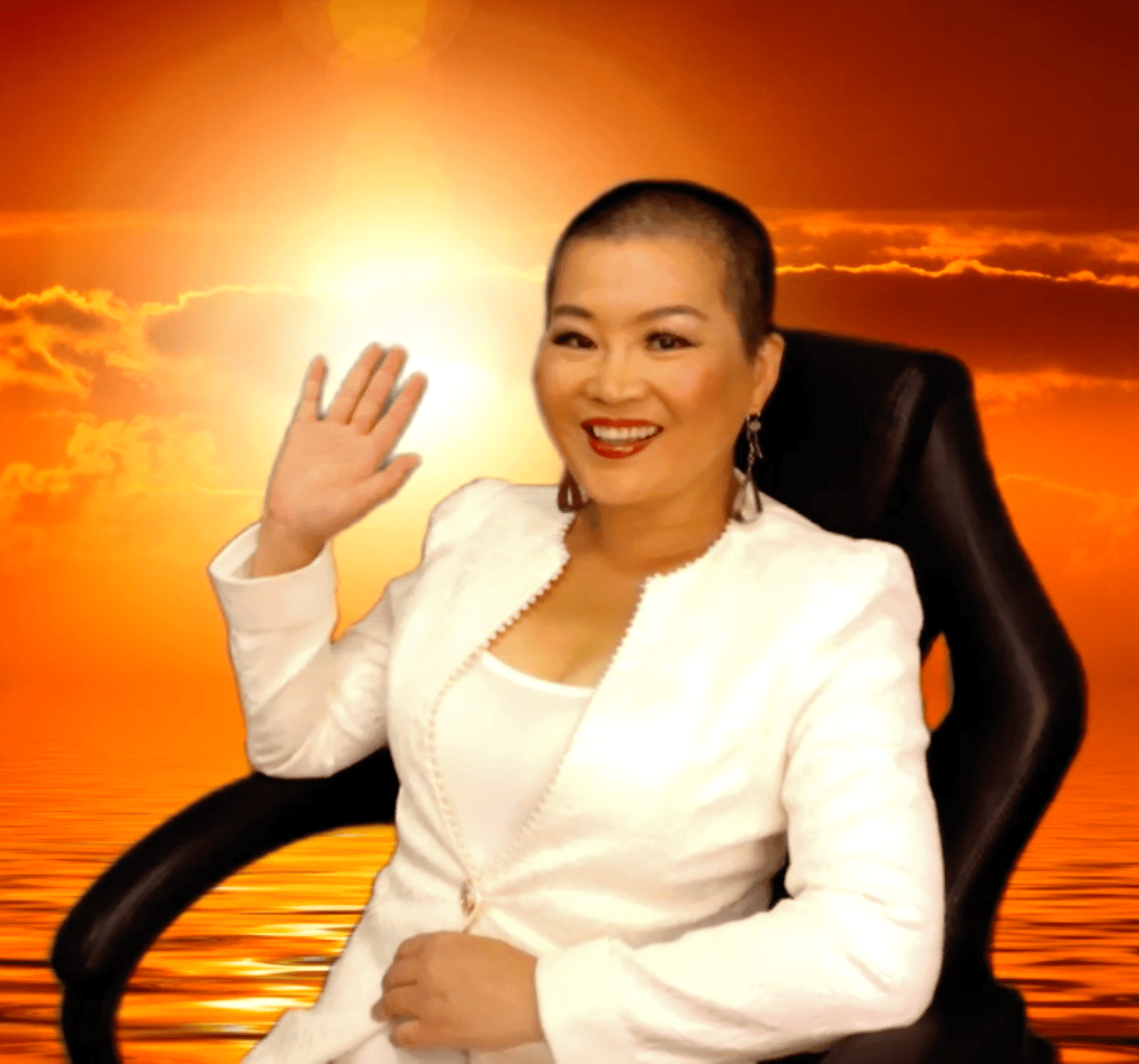 Known as mind power lady, Dr. Angela Wilson (Ph.D.) earns her authority of the most mysterious part of the human mind, that is unknown by the most through daring adventure risking her life in the darkest part of human minds connecting infinite universal matrix.
Dr Angela Wilson is identified as the first person who connects consciousness with unconsciousness and merges them to activate the infinite human potential.
She shares her discovery as a serial entrepreneur, infinite potential wealth & success coach, inspirational speaker, keynote presenter, Celebrity Interviewer, Global Peace Ambassador, Actress, performer, political member, animal advocate, and more.
As a holistic researcher and solution provider on the root causes of human tragedy from the cradle to the grave and earth misery-Matrix and Mind Matrix, she never stops searching for the next level of solution to enhance mysterious humanity.

She invested over one million US dollars in research and her refined cutting-edge "hacking the hacker " program series that can take those who are ready for each next level of mental freedom to any unlimited level they want. 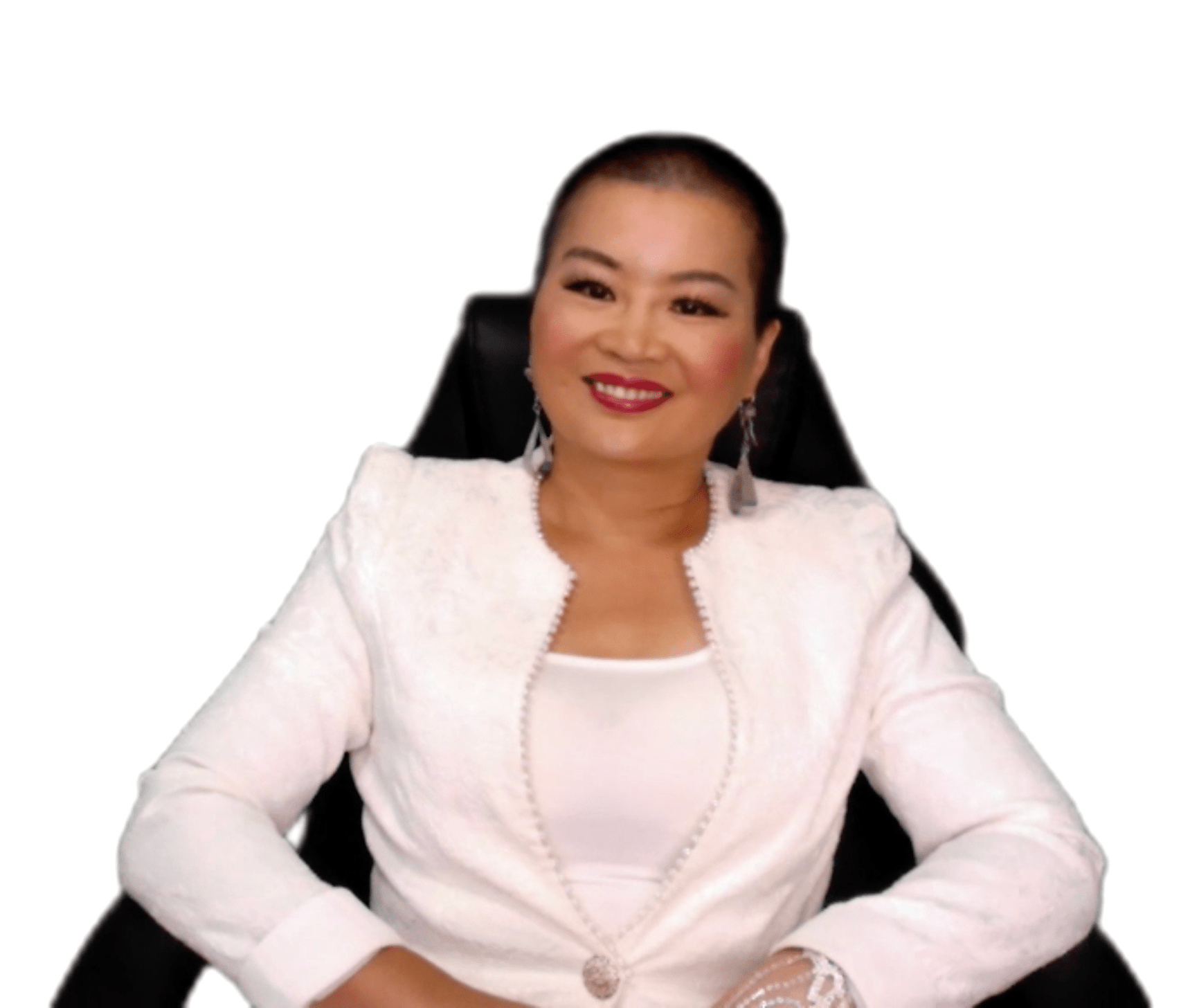 She releases the ultimate mental skill "Hacking The Hacker" program series worldwide as a holistic consultant, coach, healer, trainer, therapist, award-winning energy master, etc.
When most of us live in COVID 19 fear and the sense of uncertainty, Dr already freed herself long decades back. Her privileged childhood allowed her to foresee any unpredictable human misery and took a proactive approach and started to train herself for any unknown and "what if" situation at the age of six by hacking the hacked unconscious mind through activating multi-dimensional function of minds.
Breakthrough Now!
She has taken many fearless journeys to the next level whenever needed to discover a new level of freedom, like a phoenix rising from the ashes. This is why she is capable of dealing with the most intricate issues in the minds and freeing anyone who desires unlimited freedom within.

Dr spent over forty years refining the secret formula "Achievers Superpower" with multi-level options and unlimited angles. It benefits from her unique upbringing in a western medical family with 11 generations of Chinese herbal medicine practitioner Heritage; the 22nd generation on energy healing; academic study; holistic qualifications; rich clinical experience; and unstoppable cross-disciplinary testing bridging the gap between physical world, metaphysical world, quantum physics theory, in business, career, and personal life.
She is a regular guest as a renowned speaker and keynote presenter at many World conferences 2021 each month which conduct online due to COVID.
Below are several samples she spoke about.
Dr Angela Wilson was also invited as a member of the advisory committee, Chairperson, some of the conferences.
====> Break The Spell of Hypnotic Rhythm Now!<==== 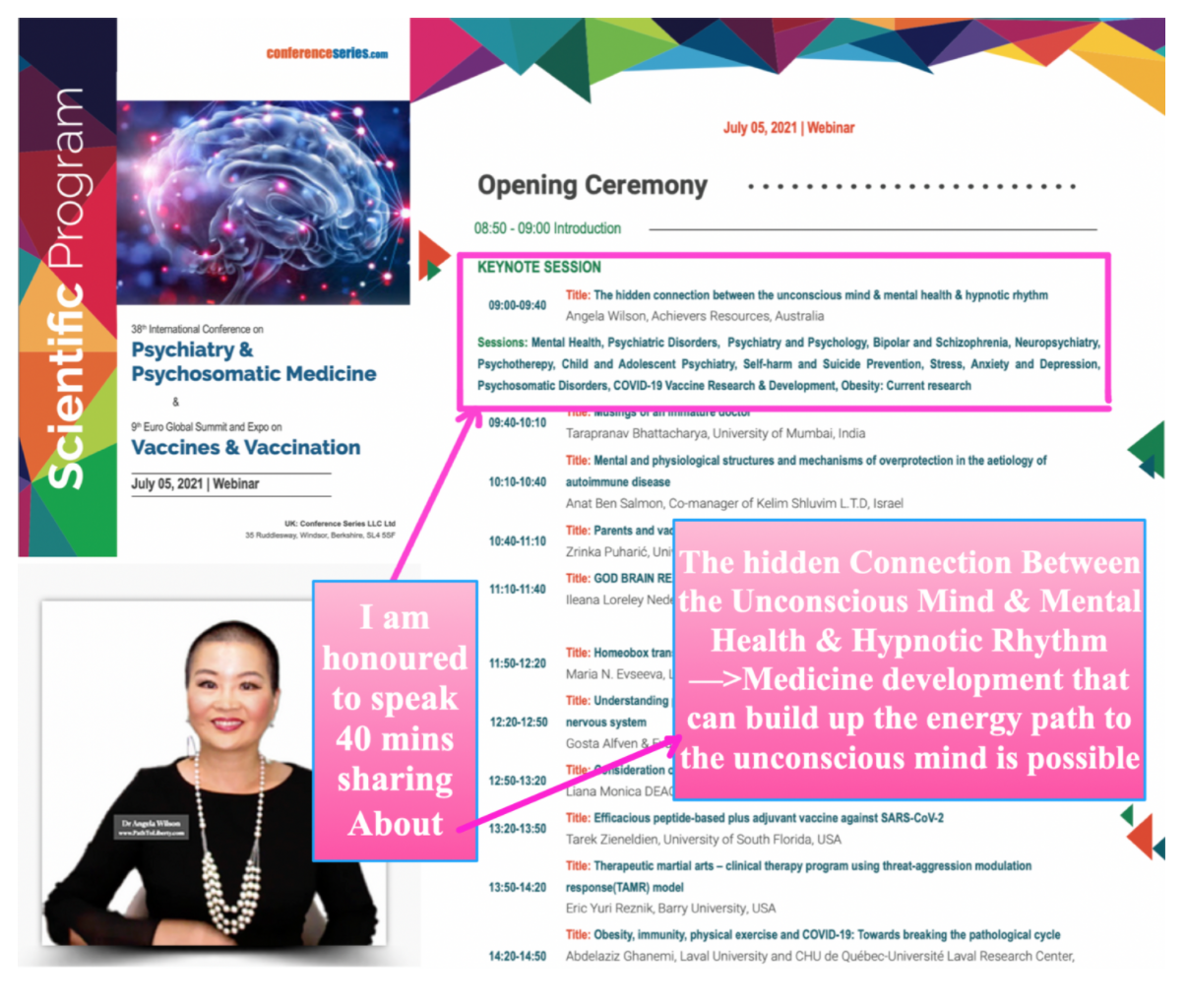 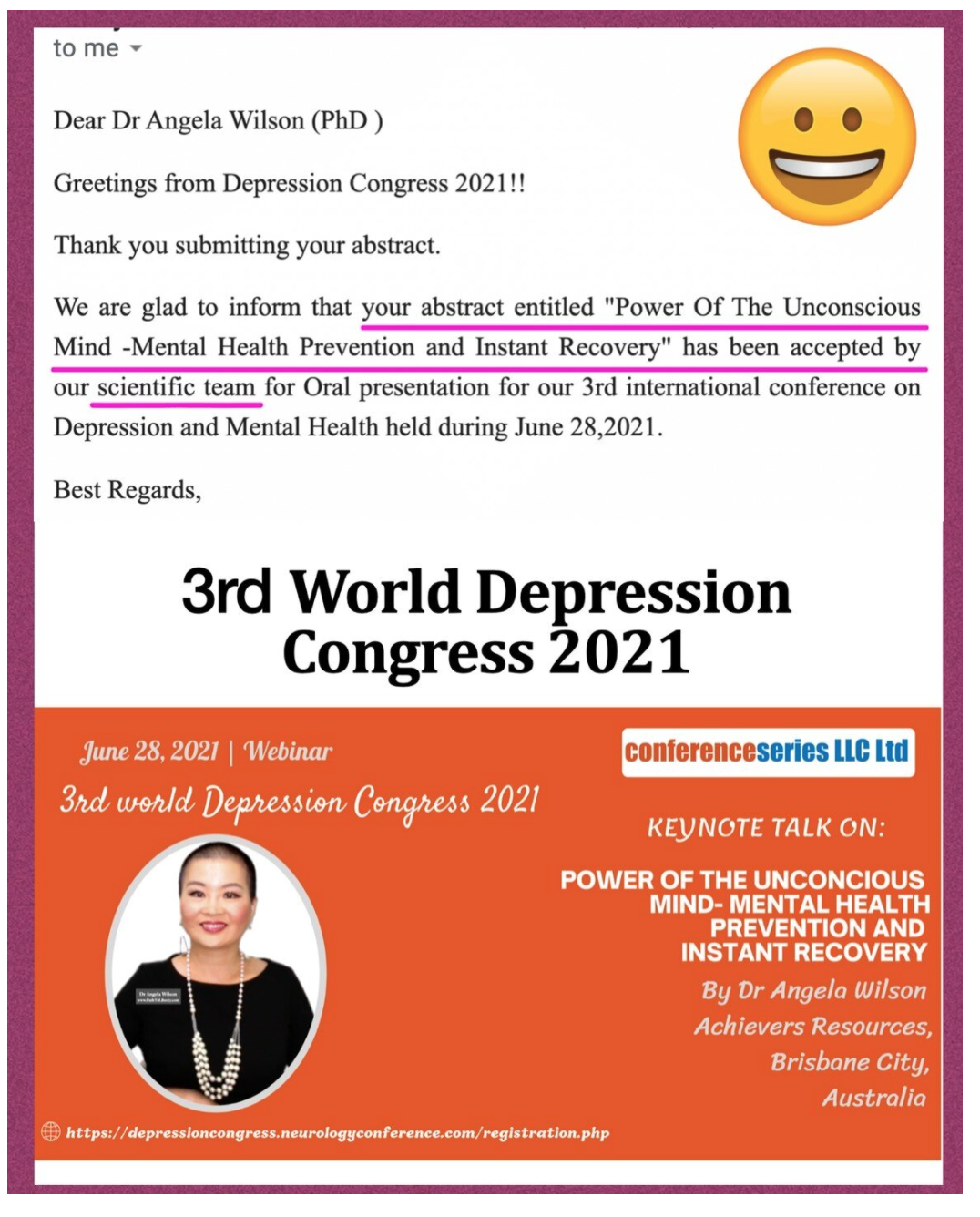 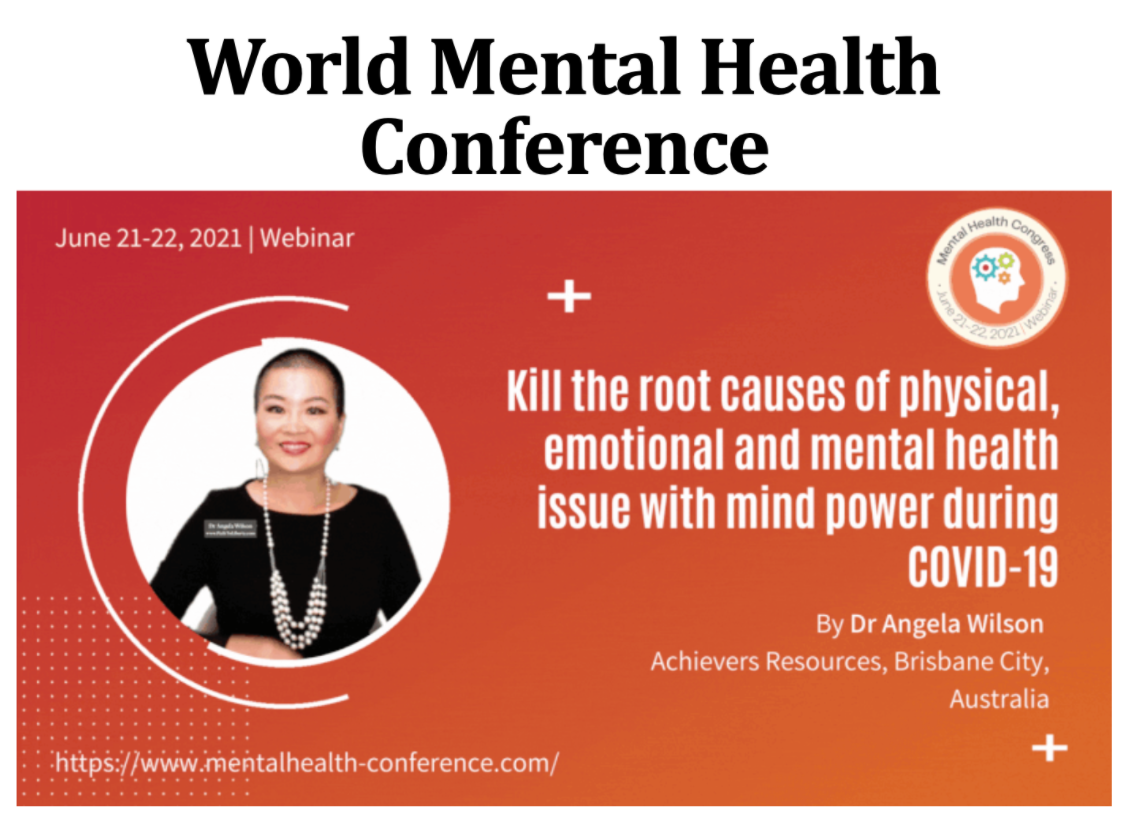 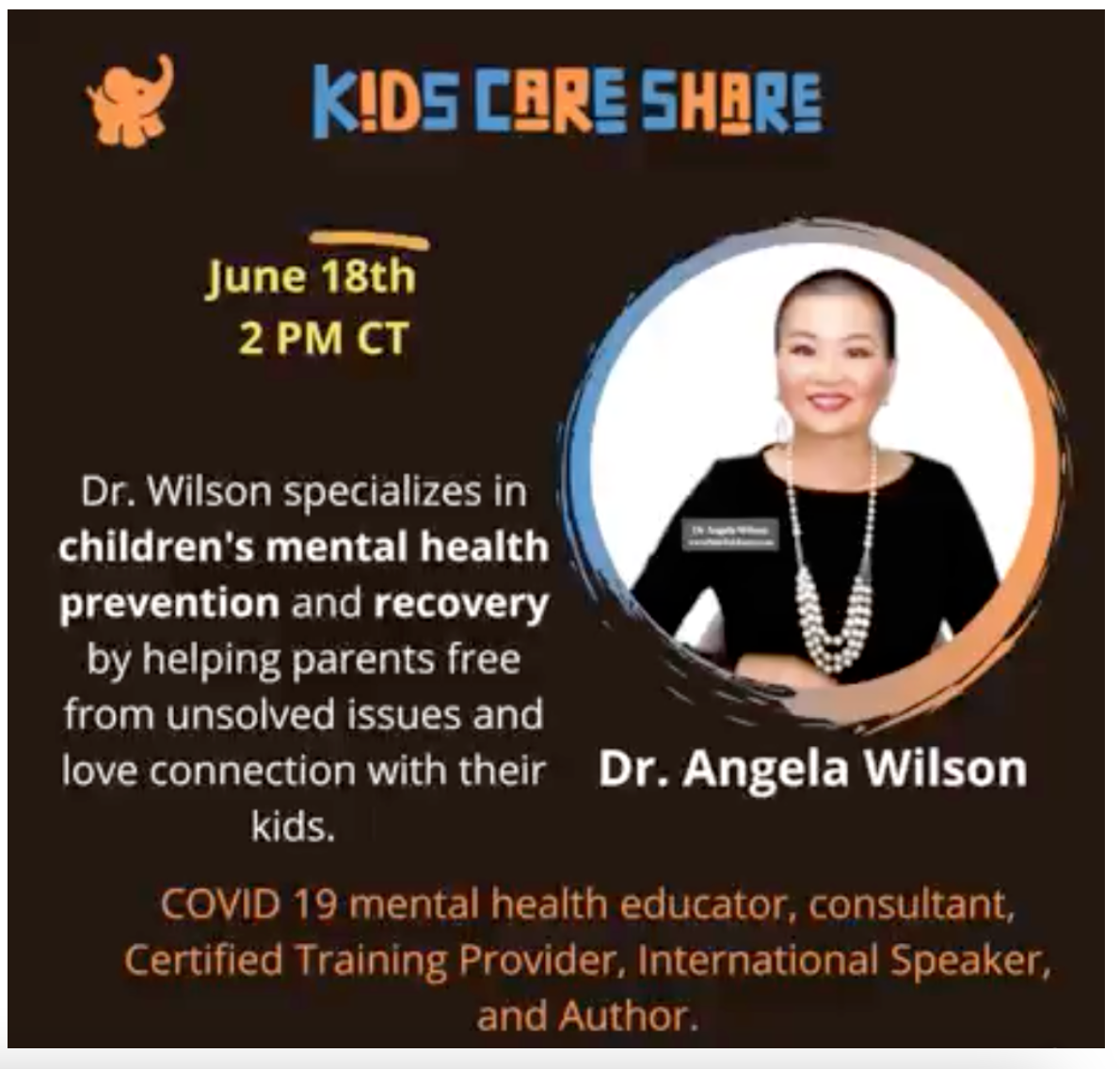 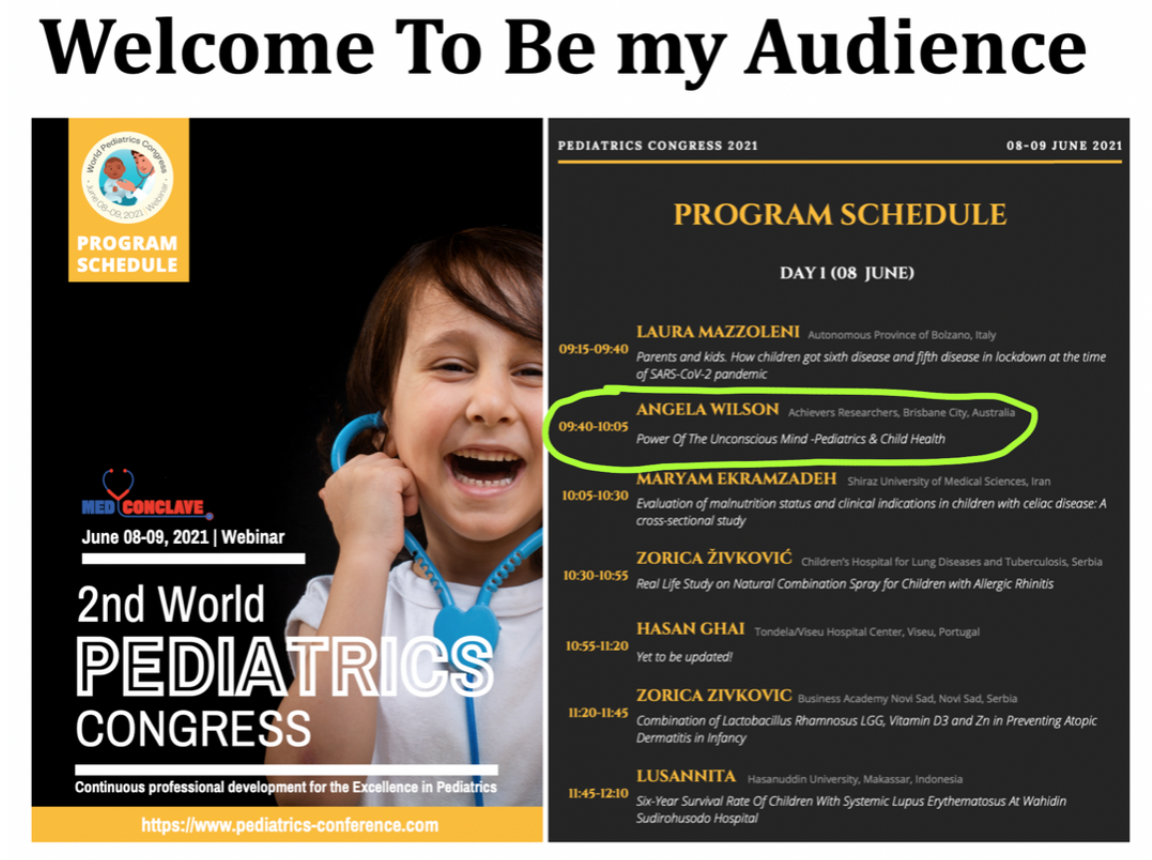 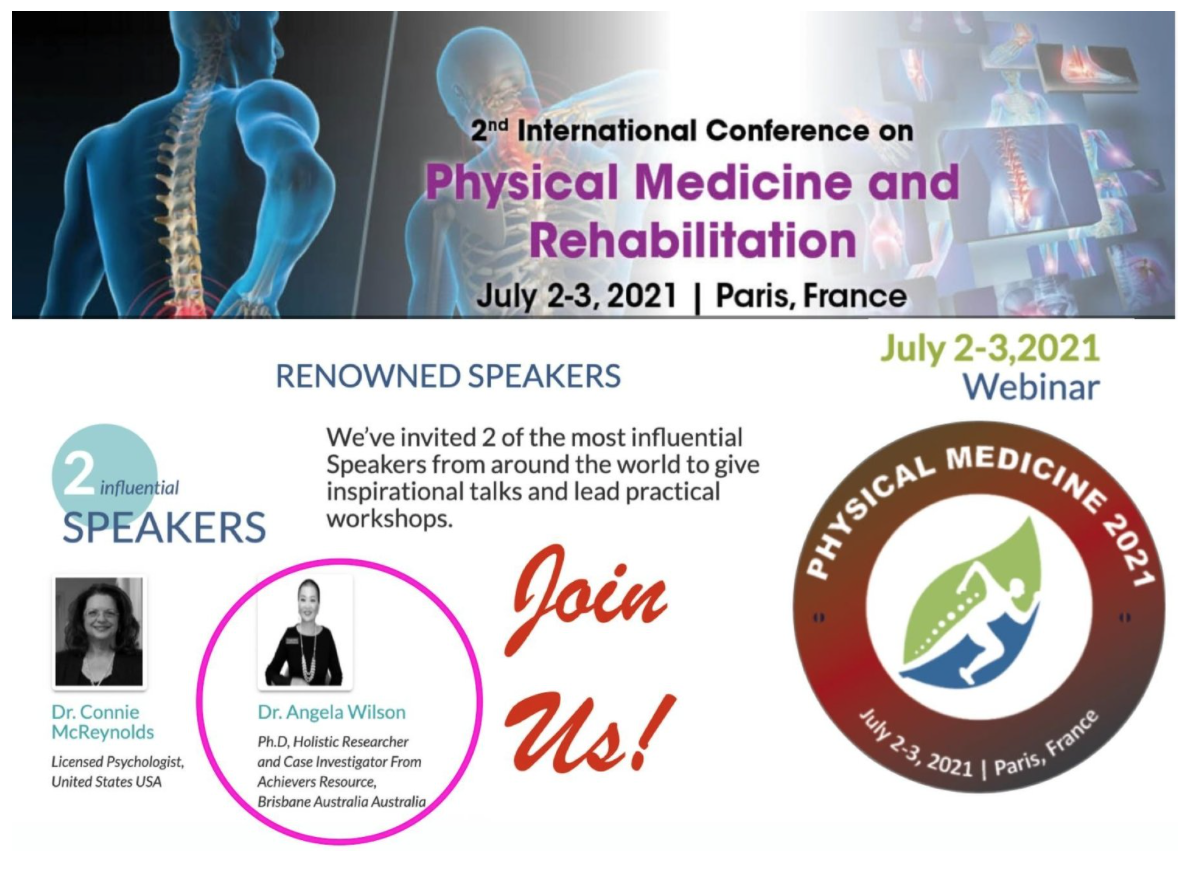 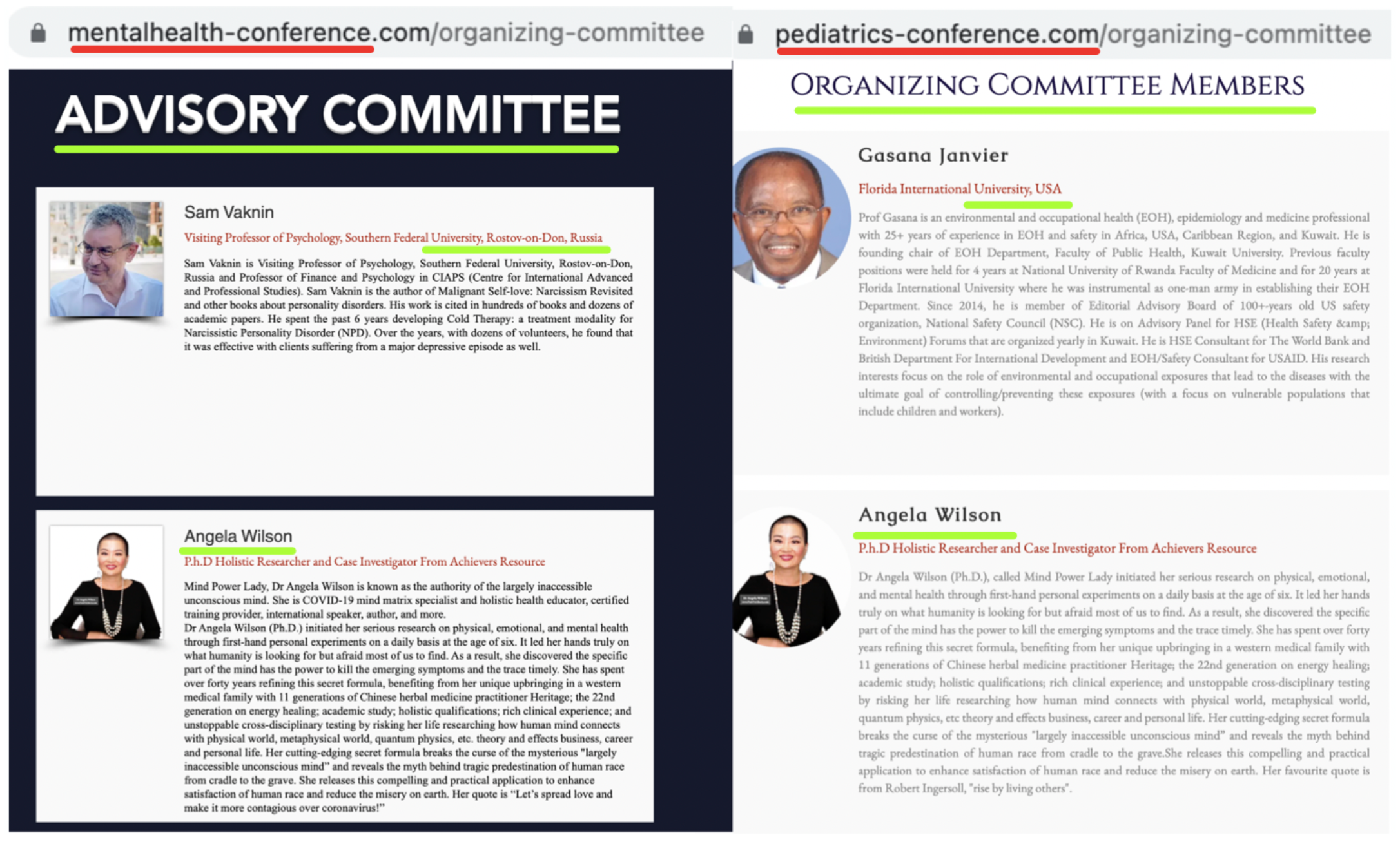 How Was The Hidden force-Unconscious Mind Discovered?

Unlike most of us who grew up with playgrounds, Dr. Angela Wilson grew up with highly stressed doctoral parents in the hospital environment.
Dr Angela Wilson experienced the whole human emotions in the first six years of her life which urged her to take a proactive approach in life, which can ensure her ultimate success. Her story, your inspiration.
She foresaw the miniature of personal tragedy and human misery regardless of personal social and financial power.
It motivated her to fight against the control of their Unconscious mind the most mysterious part of the human mind that is unknown by the most.
When most of us live in fear and uncertainty about the future due to COVID, she had gone through and survived worse emotions since birth.
As a result, she successfully dominated the unconscious mind and built a proactive blueprint for her whole life at age six.
She freed herself from human nature's limitations and took the liberty to the next level after reaching the top desire of Maslow's human need hierarchy in her early thirties. By 2012, she has successfully built her path to the next destination after this life.
She shares her secret three-step simplified mental weapon with achievers who want to explore infinite potential-the power of the unconscious mind through tangible alignment with YinYang property, investment, variety of career, business, generational wealth, etc.

Born To Be An Warrior

Qualifications That Dr holds but not limited to:

Copyright © Achievers Resources, All rights reserved.
This site is not part of the Facebook™ website or Facebook™ Inc. Additionally this site is NOT endorsed by Facebook™ in any way. Facebook™ is a trademark or Facebook™ Inc
DISCLAIMER: The Achievers figures and strategies stated on this page are from the results of our personal and existing private clients. Please understand that these results are not typical. We’re not implying this is a non-action-taker scheme or you’ll be able to easily duplicate the results of others. We have no idea if you’ll apply what we teach you or how committed to your own freedom beyond you will be. The information provided is for educational purposes only. Your results will vary and depend on many factors. All unshakeable results involve some level of risk of no commitment on massive action and effort on your part. If you’re not willing to accept that, please do not proceed as this product is not for you.